WHAT IS RUM NATION?

Our family has a long tradition of importing and distributing Scotch whisky.

In 1990 I went to Scotland to visit distilleries, sample barrels and strike some commercial agreements: during some visits to whisky brokers’ warehouses, I started to notice several old barrels of British Guyana and Jamaican rums, stacked near the single malt ones. Coming from British colonies, these rums were sent to Scotland and England for aging (in a fresher and damper climate which allowed a more gradual maturation) and for blending into the so-called Navy Rums. 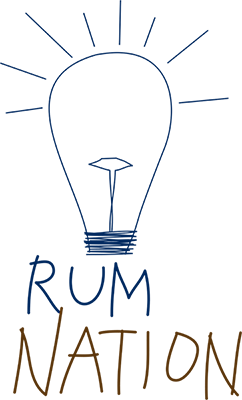 So the idea for Rum Nation came before Wilson & Morgan was born?

No, quite simply, seeing and tasting those rum barrels sparked an idea while I was already working on launching our independent line of single malts called Wilson & Morgan.

That idea however took several years to grow from the seed that had been planted in my mind by those casual and very exciting tastings... The main problem was that at the time I didn’t know anything about rum.

So when did Rum Nation really start?

Years later, having never forgotten those tastings, I asked Silvano Samaroli for advice.

We had kept in touch after Silvano – who was not only an esteemed independent bottler but also a whisky broker – had sold to my father Mario Jr several containers of whisky (Linkwood to be precise). Mr Samaroli patiently gave me some precious bits of advice, teaching me about the different rum styles and instructing me on how to make my first steps in this business. So I bought my first barrels and I bottled them. I did not want to use the Wilson & Morgan brand that I had created in 1992, and due to the huge difference in geographical styles a different approach was required. So I decided to gather a selection of the best rums from various countries under a new series, and in 1999 Rum Nation was born.

So you decided from the beginning to label the rums not with the names of the distilleries but with the areas of origin, right?

Exactly. Knowing and loving as a tourist the regions of the Caribbean and Central and Latin America, I wanted to convey the different characters of the rum-producing countries.

To add a touch of class to the bottles, having been an avid stamp collector from a young age (thanks to an old Yvert et Tellier “Timbres d’outre-Mer” catalogue from 1971), I decided to place on each label a postal stamp of the same country of origin as the rum. A graphical embellishment that continues now, even after the recent restyling of bottles and labels.

Which were the first Rum Nation bottlings?

As a consequence of the barrels discovered in Scotland and Britain years before, I chose two ultra-aged rums from former British colonies.

One was a vatting of two barrels of Jamaica 25yo (1974-1999 Cask N° 857+858) and the other a barrel of Demerara 24yo (1975-1999 Cask N° 4111). I bought several of these old vintage rum barrels, and left them to rest in a cool underground warehouse in Bristol... I bought so many of them that I still have some stock after 15 years! Thanks to the low temperatures, they are aging wonderfully, in an elegant and gradual way. In the coming years, I will have some incredibly old rums for our bottlings!

Rum Nation does not include only British-style rums, though...

Zino Davidoff had passed away a few years before. At the time I was a cigar smoker and I had loved a book on his life, so I decided to take inspiration from him and go looking around the Caribbean for the best and most distinctive rums, something which could be compared to a “cru” just like Zino did with his work of selecting tobacco leaves and terroirs.

My first trip of this kind, which started a long series of them in several countries, was at Rum Fest Barbados 2000: I was the only Italian in that edition! In 2001, during a long trip to the Caribbean, I landed on the island of St. Martin. There I met Jean Claude, in the cigar shop of Yves in Marigot. Jean Claude was born and still lives in Martinique, he sells Cuban cigars on several islands thanks to his exclusive license from Cubatabaco, and he’s a “bon vivant”, lover of good life... and rum. We quickly became deep friends and started working together; in the following years Jean Claude took me to Martinique, St. Lucia (where the local distillery had recently burnt down), Guyana, Santo Domingo... and of course all the most interesting distilleries in those places, where I found new rums for the Rum Nation series.

Once you went much more south than the Caribbean, discovering a rare gem...

Yes, during my yearly trips to South America, in 2004 I visited Peru...

Discovering a particularly interesting and yet unknown distillery. A distillery producing a rum so sweet and delicate that I dedicated a special name to it: Ron Millonario, which is a sort of a spinoff from Rum Nation.

About spinoffs... we seem to remember that Millonario is not the only rum you selected and yet was not included in the Rum Nation line!

True! In 2007 I went with Jean Claude to Guadeloupe, and we stumbled upon the small family-owned Reimonenq distillery, attracted also by their rum museum and their creepy exhibition of rare (and often giant) Caribbean insects. 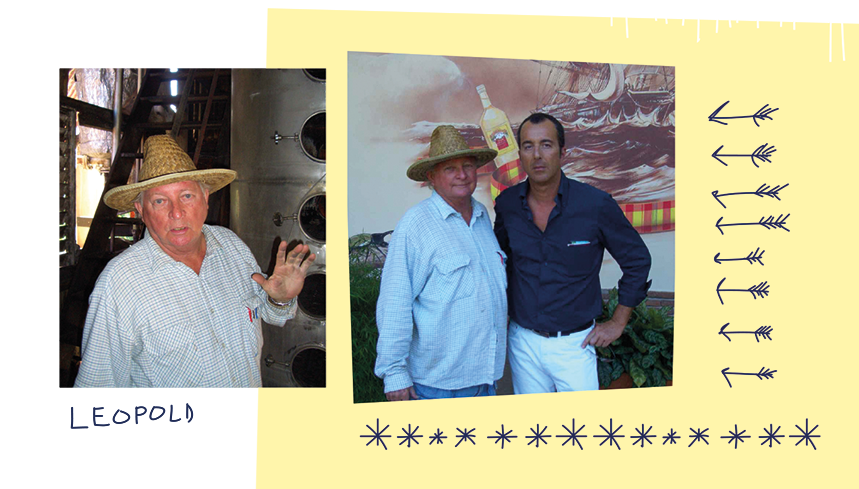 I bought several barrels of two different vintages, which were then bottled in 2008: since Reimonenq was an already established name (albeit one for connoisseurs), we chose not to add it as “Guadeloupe” to the Rum Nation line, but to leave the name of the distillery and release these bottlings in special editions exclusive to Rossi & Rossi, with a label reminiscent in style of that for our House Range single malts. We kept this style for the following releases, too. After all, the extreme character of this rum might have been some kind of a shock to our customers, used to the elegance and softness of the traditional Rum Nation catalogue!

We struck up a friendship with owner and manager Leopold Reimonenq, who made us try a truckload of samples of his “agricole” rum, one of the most extreme I have ever tasted. The opposite style of the sweet and velvety rums which were dominating the commercial trend at the time! A heavy, intense rum, with strong vegetal notes of wood, liquorice, coffee, and an oily feeling which reminded me of Tobermory and Ledaig single malts.

Are there moments in your career that you consider a “revelation”?

Certainly the trip to Guatemala in 2009, and the meeting in Quetzaltenango with Lorena Vasquez from Zacapa.

She taught me many things on how to set up a solera-like system for aging rum, with barrels of different sizes and kinds of wood in order to blend distillates with different aromatic profiles and ages to obtain a balanced final vatting, a system that we use for some of our bottlings too.

In recent years, which is the Rum Nation bottling you are most proud of?

Probably Panama 21yo, released in 2010 after meeting Don Francisco Fernández (Pancho), a Cuban Master Blender with 40 years of experience in rum-making in Central and Latin America.

He created the “mezcla” for our award-winning Panama 21yo, which was then launched in a luxury decanter.

What can we expect from Rum Nation now? Further developments?

The search never ends. In these early months of 2014 we are launching some precious Pot Still Jamaican rums, to fill a void in the Rum Nation catalogue.

We are starting with a white unaged rum, very aromatic, and in the next years we’ll continue with progressively older, aged versions.

In addition to searching for and selecting great tasting rums, what does your activity extend to? You are not only an importer, right?

Certainly not! Our goal is to shape the Rum Nation line to reflect our own personal taste and to be able to offer unique and characterful products.

The philosophy behind production/choice/aging is the same as Wilson & Morgan: we buy young rum (sometimes we can also decide what kind of distillate we want: lighter or more aromatic), we let it mature locally for 6-8 years, and then we bring it to Europe for further aging.

Can you explain in detail the reason for maturation in two different places?

It’s a matter of interaction with the wood, and the climate influencing it.

I think that the topic of maturation in two phases is very important: one at sea level and tropical temperatures, thus very fast, and the second in Europe (Britain or Italy, according to the product) which is much slower. Both phases are important, and bring out different aromas.

The first is more intense, it helps the distillate to lose the “young” notes and to take up sweetness and fruitiness (also thanks to a large percentage of ex-bourbon barrels). The problem is that after some years under the Caribbean sun, alcohol levels fall too low and the wood starts to dominate. Here the second phase comes to our aid, letting the subtler aromas come out slowly and allowing us better control of the flavour profile by means of different barrel sizes, smaller or larger according to how much we want to have oak influence on the rum or simply let it rest and soften up, leaving time to work its magic on the distillate rounding it up with the elegance that only a long wait can give.

In this second phase we can play freely, like tailors, to shape our bottlings according to our taste, and it’s as important as the choice of distillate coming out of the stills. We are helped by our experience with whisky (since we were pioneers in wood finishes), and by the network of Spanish bodegas which has been supplying us for several years with used sherry and Pedro Ximenez barrels (expensive but of superlative quality) in which we often transfer our rums for this second phase in Europe.

Sometimes we also use barrels which have previously contained Spanish Brandy. One exception to the rule is the Martinique rum, which is an A.O.C and thus must be entirely matured and bottled locally. Not a problem, since Jean Claude lives there and likes to periodically sample the barrels while smoking a good Josè Gener Hoyo de Monterrey.

Finally, of course, there is another critical moment in which art and experience are required to create a balanced and aromatically complex rum: the blending. Having an array of barrels with different levels of maturation and kinds of wood from which to assemble the final blend, it’s fundamental to taste and compare for weeks to end up with an optimal equilibrium in the bottle. We want to remain true to the spirit of the country of origin, and at the same time offer an exciting rum to our customers.

Thanks, Fabio: we’ll gladly taste the new additions to the catalogue, then! In the meanwhile, thanks for telling us how such a personal and intriguing selection of rums came to life!

Who is Fabio Rossi

Fabio Rossi, born 1961, took a degree in Oenology in Conegliano.

His father Mario Jr., who started to deal in wines and liquors in 1956, was the first importer of Laphroaig in Italy, and then of brands like Rhum Barbancourt, several Bordeaux chateaux, and champagnes like Salon. Fabio was born and grew up among bottles of fine wine and spirits, until he started his own personal selections of whiskies and rums. 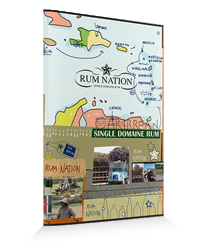 What Is Rum Nation 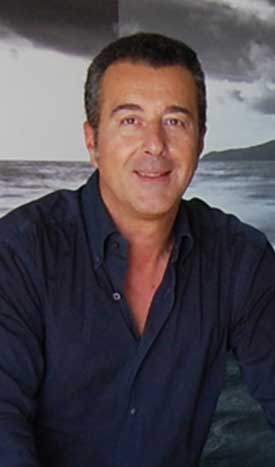